At Least It's Not Malaria

Today is my tenth wedding anniversary. And I was throwing up last night. :-/ I think I might have caught one of the bugs going around my family. Last year, I was sick the day after our anniversary, but that was from food poisoning.

I keep telling myself that at least it's not malaria.

There's a story to that.

Hubby and I were really young when we got married (I was eighteen and he had just turned twenty), and we shocked everybody by meeting and getting married super fast. For us, it was God's hand in our lives, and we were both certain we were meant to be together. I know some people who meet and marry super fast, and others who wait years and years--everyone is so different. It worked for us.

A couple of weeks before we got married, Hubby was on a pre-planned mission trip in the Darien Jungle in Panama. When he got back to the States, he didn't feel so great. Three days before our wedding, he was slammed with a headache and a fever of 104 and I think some other things. My mom told me to take him to the ER. I did. And the ER was apparently busy or something (even though they didn't look it), and they left Hubby lying on the floor (because he hurt too much to stand up) for about three hours until they got him back into a room.

The doctor decided that with the symptoms Hubby had, it might be meningitis. We told the doc that Hubby had just been out of the country, but he never bothered to do any blood tests. All he did was a spinal tap, said no, Hubby didn't have meningitis, and didn't bother to look and see if he had anything else. He said Hubby had the flu and told him to go home and alternate taking Tylenol and Ibuprofen.

This was Wednesday. We were getting married Saturday. I have a picture of him from the wedding where he's lying across his brother and sister's laps, because his head hurt so much he couldn't stand up.

But we still got married. Saturday night, Hubby was okay. Sunday night, he woke up at about 2AM with a ton of energy, declaring he wanted shrimp. I was all O_o. Monday morning, however, he was in so much pain and so sick that he couldn't get out of bed. I couldn't open the window blinds because the light hurt him. And he didn't want to go back to the ER (understandably) because of what had happened the last time he tried.

However, about 8PM, Hubby woke up (he'd been sleeping all day) and told me he had figured out how to steal an 18-wheeler truck. I was like "!!!!??????!!!!!! You're hallucinating. I'm taking you to the hospital." If the physical symptoms weren't enough, that did it for me. (For the record, Hubby would never, ever steal a truck, 18-wheeler or otherwise. ;))
I managed to get him out of the house and to the car. I parked in front of the ER and ran inside to tell someone I needed a wheelchair, because he couldn't even get out of the car. Forget getting out of the car, he couldn't even open the door. When I returned to the car, he was still fumbling with the door handle, but didn't have the strength to get it open. (When he remembers this, he swears I was only gone from the car for a few seconds.)

This time, the nurses rushed him right back to a room in the ER. (We saw one of the nurses who had seen us on Wednesday, and she goes, "Please tell me you at least got married!") And the doctor who came in immediately took a blood sample. Turns out Hubby had--you guessed it!--malaria.

Once they started pumping Hubby full of painkillers, things were much better. And then they had two specialists come in, and they were great. They were hilarious, though, because they had never dealt with a malaria case. (I mean, it's Tennessee. Who expects malaria?) So they were like "we're going to find a treatment" and then they left me with Hubby in the room. A short while later, they came back into the room, very confused and telling me they were having trouble finding Panama on a map of South America.

I went, "Um, Panama is in Central America." They brought me out into the hallway, where they had a map of the Americas on the computer screen, because they were looking to find out what kind of malaria was in different parts of the world or something. I showed them where Panama was, and then stood there while they went to the CDC's website to look for treatments. They were scrolling through it, talking to each other and going "no, that's preventative, we need a treatment!" Then they realized I was still standing there and looked at me and said, "We really do know what we're doing!"

I was very, very amused. But, you know, they didn't go to school to study geography; it was probably unimportant in light of all the medical knowledge they had crammed into their brains. They were absolutely awesome doctors. They did know what they were doing.  They got Hubby on the right medications (it took two tries--the first med they gave him made him not be able to hear). However, he had developed pneumonia, so we were in the hospital for a week because of the malaria and pneumonia. I spent numerous hours sitting in the dark hospital room (since Hubby couldn't stand the light), writing and chatting on AIM and staying sane. I ran back and forth between the hospital and apartment to shower/pick things up. It was quite a honeymoon. :p

And here it is, ten years later, and even though I'm not feeling well, I have the most awesome, supportive husband and I am so grateful for him. 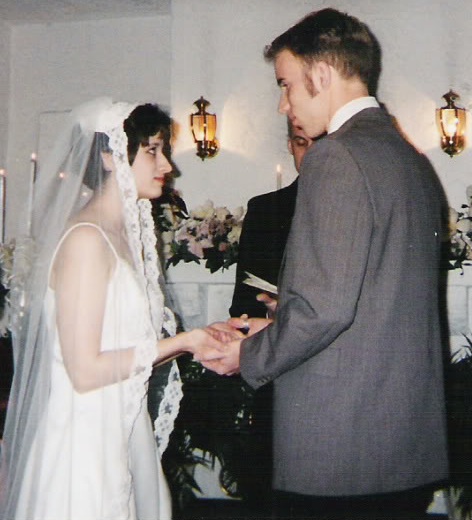 Posted by Laura Josephsen at 10:29 AM