Hello everyone! I am not Laura. I am Emily Kate Johnston, a friend of Laura’s. Laura has awesomely let me do a guest post here, and I will be continuing her theme of “Grammar Daze”, but with my own twist to indicate my style of writing. I’m totally cribbing the paint drawings, though. Those are the best part!

(I should also mention here that as a patriotic Canadian with a patriotic English mother, my linguistic tendencies have a definitely British slant. I’m all about the o in foetal, the u in colour and the extra a in encyclopaedia (and I sort of love that JRRT spells connexion with an x, even though I don’t do it myself). So keep that in mind.)

Let’s begin with something that might occur in your Fantasy setting. You have a Queen and some knights, some courtiers and some palace servants…and depending on your politics, you make also have a royal council. This seems as good a time as any to talk about the difference between the word “councillor” and the word “counsellor”.

A “councillor” is a person who is a member of a council. A “counsellor” is a person who provides advice. This seems fairly straightforward, until you remember that a member of a council who has given you advice has counselled you, and that someone who ignores the words of their counsellor could also be ignoring their councillor and is, in either case, keeping their own counsel. Perhaps I should start this explanation again…

Okay, so a councillor is a member of something; a group of people who sits somewhere and chats. If you type the word “councillor”, think about what that person belongs to. If it’s a summer camp or a high school guidance department, you have probably used the wrong word (you are also, for the record, writing my kind of epic fantasy and we should totally talk!).

For the history buffs, “counsellor” is the older word, predating “councillor” by about a century.

Another word combo that can be problematic is “prophecy” and “prophesy”. The difference here is that the former is a noun and the latter is a verb. So if you prophesy, you are making a prophecy. This can be remembered one of two ways. The first is the same way you tell “practise” from “practice”: the “ice” (or the “c”) is the noun. The second way is one I invented just now, and only works if you pronounce “prophesy” with a “sigh” at the end (instead of a “see”…both are acceptable, but I think it makes the whole thing needlessly complicated). Anyway, “sigh” is a verb too, and in addition that, it’s also what I tend to do when a character prophesies (prof-a-sighs), because it drives me a bit crazy.

I can only think of one example of this off the top of my head. At the very end of “Caprica”, Sister Clarice says “I am going to prophesy now”, which is great, except she pronounces it “prof-a-see”. On the other hand, she’s English, so maybe that explains it.

For my third I am going to pick two words that aren’t technically “epic”, but are still a personal bugbear of mine: nauseous and nauseated.

Now, a quick look at dictionary websites will tell you that “nauseous” has come to mean the same as “nauseated” thanks to usage patterning. Even though I championed linguistic shifting just a few paragraphs ago, this is where I draw the line. It’s a thing. 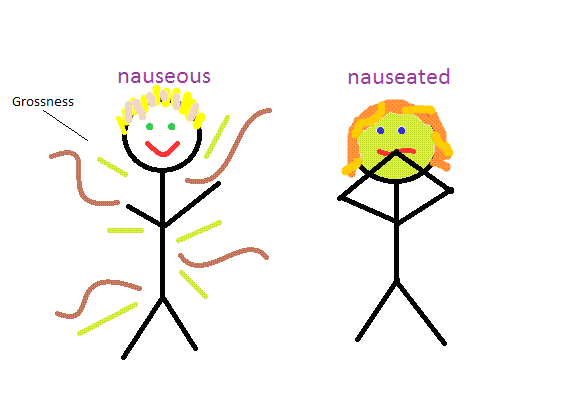 I encourage you all to stick to your guns on this, lest we end up with another “I could care less”.

That’s it from me for now! Come on over to my blog where you will find…well, not much, to be honest, as it’s a work in progress, but there are links to my book reviews and short stories. So it’s a start!

Emily Kate Johnston is an aspiring writer, an obsessive grammarian, a compulsive reader, and a classic procrastinator. You can find her at her new blog, Emily Kate Johnston on Wordpress, just as soon as she comes up with something cool to launch it with. In the meantime, she does a lot of book reviews.
Posted by Laura Josephsen at 12:33 PM