Today, I'm happy to host part of Tyrean Martinson's blog tour for her book, Champion in the Darkness! Tyrean is here to talk about how her novel began, so, lovely blog readers, here she is!

A Rejection Letter That Started A Novel
No writer likes to receive a rejection letter. I know I don’t. However, sometimes, rejections can be the beginning of something good.
Originally, Champion in the Darkness was a short story, entitled “The Choice.” I submitted it to three different publications. I received three rejections.
Here’s a section from one of those rejection letters:
“Overall there wasn't much to the story. It was more of a section of a larger story. As a reader, what would seem the truly interesting and conflict-filled parts would be the training, and what was to follow the choosing of the sword. As a reader, I suspect there is much more to this world the author has created, and this slice wasn't enough to provide an adequate stand-alone story.”
I hadn’t thought of “The Choice” as part of a larger story, but the phrase “what was to follow the choosing of the sword” stayed with me, and I spent some time daydreaming about the characters and their world, and eventually this became a series of short vignettes that seemed like the beginning of a novel. However, I couldn’t seem to get it all to come together. I waited for a while, wrote backstory, and then finally for NaNoWriMo 2010, I wrote The Crystal Sword, which I later renamed Champion in the Darkness.
A rejection letter started my novel.
So, to any writer that’s frustrated by rejection letters, I want to encourage you not to look at the closed door, but to look for the window of opportunity that’s open.
Have you ever received a rejection letter that triggered an idea in your imagination?

Tyrean Martinson lives and writes in the Northwest, encouraged by her loving husband and daughters, and reminded to exercise by her dogs and cat. Champion in the Darkness is her first book in the Champion Trilogy, but she has previously published short stories and poetry. She can be found online at Tyrean’s Writing Spot.

Thank you, Tyrean! And now, let's take a look at her book, Champion in the Darkness! 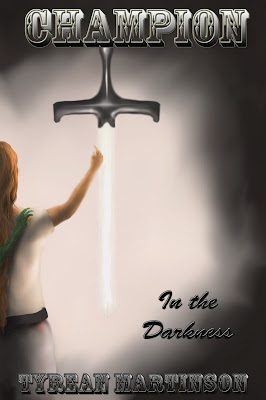 Clara is younger than most trainees, but she is ready to hold a Sword Master's blade. While visions and ancient prophecies stand in her way, they also offer a destiny unlike any other. Clara is aided by a haunted mentor, Stelia, whose knowledge of their enemy Kalidess is both a bane and a blessing. As evil threatens their land, Clara and Stelia must find the strength to overcome the darkness!

Champion in the Darkness is YA Christian Fantasy and is the first book in the Champion Trilogy.