You guys. How is it already halfway through November? O_O It's a time warp, I tell you. Or a blue police box. 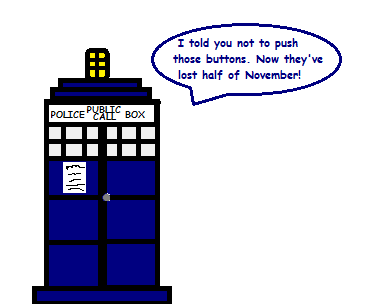 As I've started NaNoWriMo week 3, I have passed 40,000 words for the month and accomplished one of my goals: I've finished one of the three incomplete novels I had going before November. *throws confetti* One down, two to go. (And one of the two remaining is co-written, so it's shared work.)

I still can't believe it's almost December.
Posted by Laura Josephsen at 3:11 PM

Email ThisBlogThis!Share to TwitterShare to FacebookShare to Pinterest
Labels: doctor who, NaNoWriMo, yes i am a geek