I'm heeeere! A brief update on NaNo, Awakenings, and a quick Grammar Daze of Simple Past Tense Vs. Past Perfect Tense

I have been writing my books like a madwoman and that has consumed all of my brain energy. I pull up my blog from time to time and stare at it in a braindead sort of way and then get back to writing my novels. Where does the time go? Honestly, how can it already be almost November? (And NaNoWriMo, for those doing it! I'm Laura_Josephsen on NaNo. For those of you doing it, I'd love to find you on there! I'm not going to be using it traditionally this year. Most years, I start a novel from scratch, but I already have several that desperately, desperately need to be finished, so I'm going to be setting my word count goals on completing stories instead of starting them. ;) I know, this is technically cheating, but if I can use the motivation of a word goal for NaNo to help me finish things, I'll consider it a success.

My husband, after watching me do NaNo the last three years in a row, refers to it as "NaNoLoseYourMindo," and anyone who has participated in it before knows how accurate that can feel. In honor of the fun and yet mind-sucking month of crazed writing, I've made this badge/icon/award thing for any of you participants. In honor of you and the upcoming month, feel free to grab this and plop it on your blog or whatever. 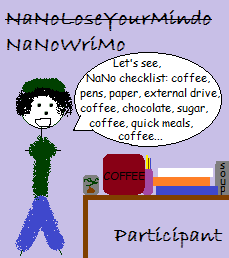 Next, my co-author on the Restoration series, Faith King, and I are selling our few remaining copies of Awakenings version 1.0, since version 2.0 was just released. For information on that, you can see Faith's post about it here: Awakenings 1.0 Collectible Copies

And because I am sooooo dreadfully behind on blogging and my Grammar Daze posts, this week's month's Grammar Daze is going to be on simple past versus past perfect tenses. These are something I see confused a lot--mostly, people (I am guilty of this too) get so caught up in writing their simple past stories that they forget to put appropriate things in past perfect tense.

Simple past is the tense that the vast majority of stories use.

Simple Past Tense: My vampire squirrel attacked unsuspecting citizens once the sun went down. 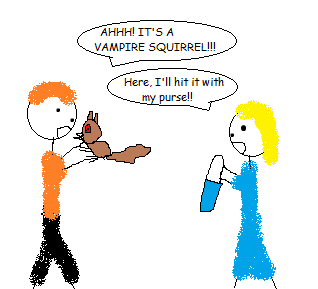 The verbs are in simple past. So if you're using simple past to tell your story (rather than present tense, which some people use), this is going to be what's happening right now in the story. Your vampire squirrel just, at this moment, attacked these people.

However, if, in the narrative, you're telling someone that your vampire squirrel did this yesterday, or last month, or a year ago, you change it to being past perfect, where you basically add "had" or "have" before the verbs.

Past Perfect Tense: My vampire squirrel had attacked unsuspecting citizens once the sun had gone down.

A lot of the times I see this missing (or miss this in my own stories) is when a chapter or a scene starts out by backtracking, but not using the proper tense. For example:

"After three days, the characters were sick to death of tromping through the mystic swamp. Their first day, they were bitten by so many giant mosquitoes that their eyes almost swelled shut, and then the local witch made an appearance and tried to turn them all into bananas." 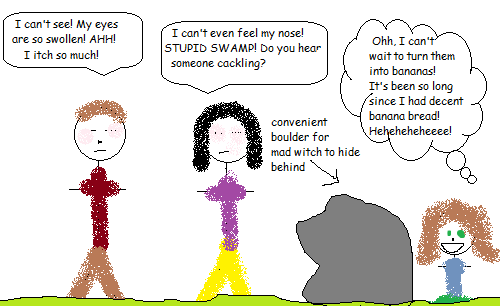 And maybe there's a bunch of this, telling what the characters had been doing those first three days, and then the story picks up with the characters NOW. The problem is that this started with "After three days," which implies that those three days are already gone. That means this first paragraph should have said:

"After three days, the characters were sick to death of tromping through the mystic swamp. Their first day, they had been bitten by so many giant mosquitoes that their eyes had almost swelled shut, and then the local witch had made an appearance and had tried to turn them all into bananas."

Some people have pages and pages of this, and so you just need to pay careful attention to what time your current story is in and whether it might be better to take the sequence in chronological order. You could put this entire thing in simple past tense if you were only to take out "after three days" at the beginning and move it until after all the stuff they did during the first few days. It would then look like this:

"Their first day in the mystic swamp, they were bitten by so many giant mosquitoes that their eyes almost swelled shut, and then the local witch made an appearance and tried to turn them all into bananas. After three days, the characters were sick to death of tromping through the swamp."

I hope that makes some sense.

And that's all from me for today! I have to get back to writing Story A so I can work on my co-written part of Story B this weekend. My poor co-author put up with me totally neglecting our story last weekend because the characters of Story A were eating my brain. Yes, I have Zombie Characters. (Okay, no, they are not literally zombie characters, because that is not my thing, but the way they consume my brain, sometimes I wonder. ;))

I hope you all have a FABULOUS weekend!
Posted by Laura Josephsen at 4:41 PM