I hope all of you doing the A-Z challenge have been having a blast with it! I can't believe it's already halfway through April. I haven't been blogging because all of my free time has been going to frantically writing Rising Book 2. I'm almost halfway done--I have about a chapter and three-fourths left to the halfway point. I think this will probably be my longest novel yet, considering I have 69,154 words already. There's just so much more story to tell and tie up in this one than the first one.

I've also been prepping for my daughter's birthday party, which is today. Her birthday was a couple of weeks ago, but today was the first day we had free to do it. She wanted a Yoshi cake from Mario Brothers, and let me tell you, that thing was hard to make. O_o I had made the head out of rice crispy treats, but it fell apart (slooooowly) after I attached the head to the body, so then I had to remake the head smaller. Plus, I was pretty much out of frosting at that point, which meant I had to steal some from around the body. Yeah. Definitely not my best cake ever, but it's together and it's edible, darn it.

Here is the end result: 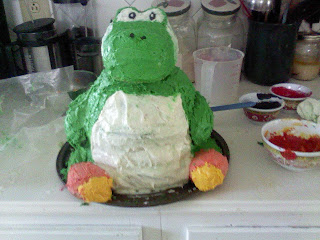 I also had my next Taekwondo belt test this past week--I don't have the results for that yet. So. Yes. April has been busy.

I hope you all are having a wonderful month and that you have a fantastic day!! I need to go do final prep for a birthday party...
Posted by Laura Josephsen at 11:21 AM