My son has been taking Taekwondo since we moved to Tennessee this year. He did karate a little bit before that, but there was no karate dojo here that did the same form he had been learning, so he switched to Taekwondo. He loves it, and I've been watching him learn more and more and taking him to belt tests and a tournament and a gazillion classes.

Well, my husband and I recently decided to start taking Taekwondo, too. Hubby's been wanting to do it forever, and I always thought it would be neat, but didn't know if I had the motivation for it. However, I suck at exercising on a regular basis (I really, really do), and I have a heart condition (a mild form of it) and my cardiologist tells me I need to be exercising several times a week. So doing Taekwondo, I'll not only learn self-defense (which I've wanted to learn for ages) but I'll be holding myself accountable to the exercising.

After a couple of classes (and giving my legs time to adjust--all that kicking made them soooo sore), I'm fumbling with where the heck I'm supposed to put my feet and how to hold my arms and the teacher keeps saying, "Relax! Taekwondo is all about relaxing!" and I'm O_O.

I do have a point to all of this.

I went to a Taekwondo class to do it with my son, and he was in the back of the room, working on his moves with someone else, since he's several belts down and learning all sorts of patterns. And he always makes it looks so easy. The kicking, the punching, the various blocks and turns...and there I am, flailing my way through the basic moves and growing ever more impressed with how much my child has learned. 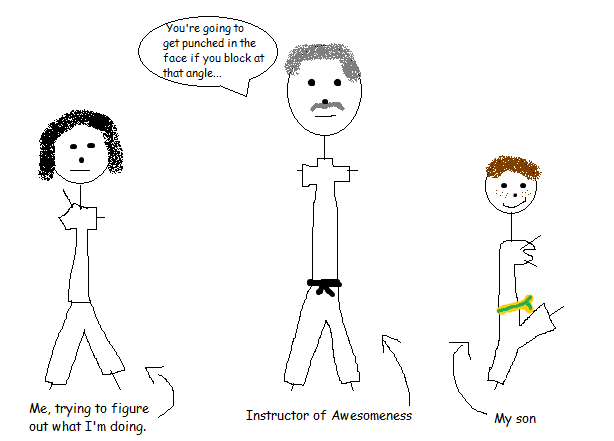 I got to thinking about how it's like writing. How when a person first sits down to write their very first book, it's a lot of flailing around and trying to find your footing and figure out what in the world you're doing. You read published books, or you read a friend's manuscript, and you wonder how you're ever, ever going to know how to do it that well. Or do it at all. And it doesn't always end with the first book. Maybe you're writing your tenth novel and you read something amazing and you realize how much you still have to learn and you wonder how your books are going to stand up among all of the books that are so incredible.

Sometimes it all comes back to perseverance, and determination, and knowing that there's always room for improvement, and you're going to make mistakes. It can be overwhelming when you think of how much you still have to learn, so much of the craft you still have to know. It's okay. You'll get there. One step at a time, one key stroke at a time. You'll slowly learn the movements and how everything fits together and why you're doing certain things and avoiding other things. You'll push yourself to new limits and learn and do things you didn't think you could before. If you give up because things look hard or you don't think you'll be able to push yourself that much, who knows what stories you'll miss out on? You have a story (or stories!) to tell, and only you can tell it. You'll figure out how if you just keep at it.

Now I just need to remind myself of this when I go to the next Taekwondo class...
Posted by Laura Josephsen at 12:08 PM