Tara Tyler asked that I do a post on effect and affect, so I'm going to do that for this week's Grammar Daze.

Affect is typically used as a verb. (Verb = action word for the purposes of  "affect." It's what you do. To be or not to be. Or in this case, to affect or not to affect.)

An easy way to remember the distinction is to use alliteration. In this case, we'll use effect and elephant. They both start with E, and they're both nouns.

If you want to know whether you should use effect or affect in a sentence, replace the word with elephant to see if it's the noun that you need. If it is, use effect.  Like so:

The effect was enormous.

Effect is the subject of this sentence. To be sure, replace it with elephant.

The elephant was enormous. 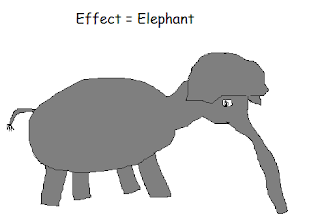 Some other sample sentences:

Now, for affect. People are affected by things happening. In this case, we will find another verb that starts with A. Let's go with assassinate.

It will affect us.

Let's see if this works with an alternate verb.

It will assassinate us. 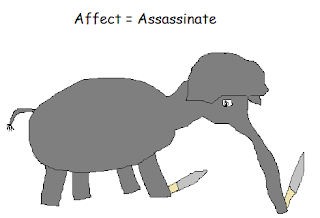 A couple of other examples:


One more thing... a couple of exceptions! (Because English is good at those.)

In all of my years of writing, I don't think I've ever used effect/affect as described below, but it's good to know this anyway.

In a few cases, effect is used as a verb. As a verb, it's usually to show achievement of a final result, as in: "They will effect a new law."  As I said, most of the time, you'll use effect as a noun.

Likewise, as Emmy Roo pointed out in the comments, "affect" can sometimes be used as a noun. It's usually used in psychology, and it has to do with emotion and mental states, as in: "The patient's affect was disruptive." (A quick note that when affect is used like this, it is pronounced differently. The stress is on the first syllable, whereas when it's used as a verb, the stress is on the second syllable.) Again, though, this isn't used very often--unless, perhaps, you are in a field that talks a lot about affects.